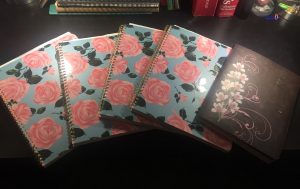 Writing surfaced as my preferred medium long before I understood what it meant to choose a career. I’ve embraced writing, danced around it, turned my back on it, pursued it in secret, announced it to the world and rejected it in shame. Finally, after asking for forgiveness, I walked tentatively with the Writer inside of me on this tilt-a-whirl journey to become a published author. But it was only after I gave myself permission to put the absolute worst on the page that the truth of my characters began to rise.

CHRONICLE OF A WRITER IN PROGRESS…

1950s— I enter the world screaming for comfort while dreaming of life as a Contender.

1960s— My storytelling abilities surface early. I lie with a straight face and laugh when I offer the truth. Friends say I’m destined to be famous. I dream of being the next Alfred Hitchcock and write stories for his television show.

1970s— I trade in Hitchcock for Emily Dickinson. Pen poems by candlelight and submit them to Random House. The Random House rejection doesn’t stop me, but my college writing professor crushes me. By the end of the decade writing becomes a secret.

1980s— Graduate from the University of New Orleans with a MFA in Performance and a minor in Stripping. Poetry transforms into playwriting.

1990s— Work as an Actress, Acting coach, Director and Choreographer. Complete six plays. Beating the Odds, a one-act, is part of the Washington D.C. Theatre Festival and staged at Mill Mountain Theatre in Roanoke, Virginia.

2000-2010— Swap plays for short stories thanks to a Writers Workshop in New Paltz, New York. Write a short story called Telegram Express based on how I ended up as a stripper in New Orleans. Participants encourage me to expand it into a novel. Complete the novel and write two more. Attend Writing Conferences, and realize I don’t know anything about writing. Rewrites become my middle name and my new license plate.